A little guide to the Japanese Onsen

My favorite Japanese hot springs. And answers to the most frequently asked questions (including tattoos, of course): a guide to Japanese onsen

There are few things as enjoyable as soaking in hot water.  Muscles relax, mind empties. And in Japan there’s a lot of hot water: the whole country is in fact more or less sitting on it. Volcanic activity brings with it many problems the country has to routinely deal with it, some tragic, such as earthquakes and eruptions. But it also gifts Japan with the onsen, the Japanese spa.

Here the spa originated as public baths and have their roots in a past in which not all homes had a bathroom. In public baths one cleaned himself. And the, relaxed (and warmed up a little bit as well in the meantime). The difference between onsen and public baths (sentō) lies only in the type of water.

The Japanese think of the bath, properly, as being something peculiarly their own. There is a sense of profanation when the foreigner enters
(Donald Richie, the Inland Sea)

The entrance into an Onsen. Photos inside are usually prohibited (photo by Patrick Colgan, 2015)

How to recognize an onsen 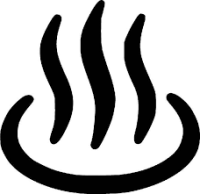 Onsen are usually easily recognizable. Outside they almost always have a symbol representing hot water, sometimes accompanied by the ideograms of the word onsen (温泉). Often there are also flags, tents or signs with the word yu (ゆ), hot water, on them. Interesting enough, Japanese has a different word for plain or cold water (mizu): it is as if it were a different thing, another state of matter. And this also indicates the importance of hot water to Japanese culture.

But let’s get back to the word onsen, which can mean different things:

Are tattoos really banned in the Japan Onsen?

In theory, yes, in reality not always, even if many will say there are no exceptions. The guides and many Japanese will tell you that this rule is very strict: those who have tattoos don’t enter. It is a way – as it’s generally explained – to keep out the yakuza, criminals who are generally covered with traditional tattoos.

The reality is that the rule isn’t always so strictly enforced for various reasons. Sometimes onsen will decide case by case.

But let’s start with my experience first. I have a couple of small tattoos not large – but not even minuscule – and in ten trips to Japan and dozens of visits to onsen and public baths of hotels – where in theory the same rule applies – I have never been denied ‘entrance’. I avoided places with ‘no tattos’ signs or that I knew were very strict about it. And every time I asked, politely, “Irezumi (or tattoo) wa, daijobu desu ka?” (Tattoos are ok?). And only in one case I was asked where it was and was told to cover it with a small towel (I will write about this item later). The other times I just got a daijobu (ok) or was just waved in.

From what I understand in big places – like Oedo onsen in Tokyo – the rule is very strict. The point is that some places, though, decide, as I wrote, case by case: it might depend on how many people are inside, how big are the tattoos and sometimes the owner or cashier might just be too embarrassed to deny a foreigner the entrance. But even if you are allowed in, some customers might not like your tattoos and find it impolite. Some might complain with the owner. This is the way it goes.

The point is, probably you shouldn’t even ask to be let in.

Anyway, even the yakuza are entitled to a hot bath: at the Funaoka onsen in Kyoto I took a bath next to Japanese completely covered with really crazy traditional tattoos.

Other than rare tattoo friendly onsen, options are waterproof tattoo covers, such as Aqua (which work if your tattoos are not big), or using private onsen, more on them in a bit.

Things are slowly changing though (even the government tried, with little luck) and Kinosaki onsen opened seven publich baths to people with ‘fashion tattoos’. 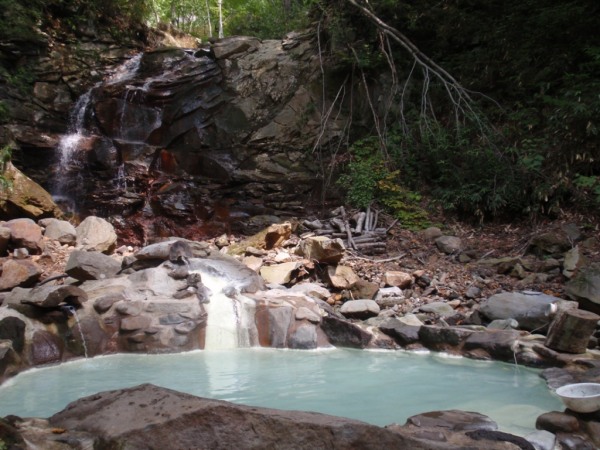 A guide to the Japanese onsen: the basics

What is the best season to enjoy onsen?

All seasons are good for a bath. I find it, though, way more pleasant when it’s cool or cold outside. Imagine a hot outdoor bath, in front of woods and mountains, under a gentle snowfall: this can be unforgettable. And onsen can also warm you up a lot for several hours. And indeed the tradition of hot bath – according to some – also derives from the lack of heating in the homes of the past.

Some of my favourite onsen

I haven’t been to some of the most famous places like Kinosaki onsen or Kurokawa Onsen (but I did go to Beppu) and when I went to the famous hot waterfalls of Kamuiwakkayu in Hokkaido, a sort of hot waterfall in the middle of the woods, they were closed for security reasons (falling rocks). So this list is personal, and I will updated in the future. Also, some places are in really touristy areas.

In  all of this places I was allowed to bathe although I have tattoos. But don’t consider them ‘tattoo friendly’ as I think most of them will decide case by case. Always ask politely.

This place is very famous, it’s on all guidebooks. But it’s not a real onsen, since the water is heated and not naturally hot. It is also a bit difficult to reach as it is in a northern suburb of Kyoto. This ia peculiar place: some might find the changing rooms disturbing, as the upper parts of the walls are decorated with beautiful wooden bas-reliefs.

Beautiful and violent: the problem is that if you look at them well you see that the artwork depicts soldiers who cruelly massacre enemies, some of whom seem to be Chinese peasants.

The bas-relief dates back to the time of the invasion of Manchuria and that explains a lot. But it’s a really nice, and true, ancient public bathroom: it’s a hundred years old. There are no large pool-style tubs found in more modern facilities. But it has an incredible variety of pools each different: wood, hot, cold … with herbs. And it has a beautiful rotenburo, an outdoor stone tub. If you let yourself be deceived, it can really feel like being far away in the countryside.

Funaoka Onsen, Kyoto; photo by At by At
License  CC BY-SA 3.0 via Wikimedia Commons

Link: Funaoka Onsen (Inside Kyoto) How to get there: Kuramaguchi stop, bus 106. Or taxi!

This onsen in the hills north of Kyoto is divided in two. A spectacular outdoor pool overlooking the forests and an ugly-looking (from the outside), pool-style establishment, a hundred yards away. Obviously I chose the first, which was also way cheaper. I also wrote a post about Kurama.

How to get there: By train from Kyoto. Take a train from Demachiyanagi station (not included in Japan Rail pass) and get off at Kurama. Then you can take the free shuttle or walk twenty minutes.

Ohara no sato, near Kyoto

This minshuku – family-run guesthouse – has a nice onsen. The outdoor baths, tiny barrel-like tubs are in front of a forest. I will never forget bathing in this water under the snow. And Ohara, in the hills of Kyoto, also deserves a visit. I wrote about it here: Nine day trips from Kyoto

How to get there: by bus from Kyoto (45 minutes). Then ask. Link: site in Japanese – book a room on Booking or Agoda

Small onsen in a quiet area of this beautiful, and sometimes crowded, city. I imagine foreigners don’t come often to this place. It has outdoor tubs. The name is a play on words with that of the famous Kenrokuen garden of Kanazawa (The garden of the six virtues becomes the onsen of the six virtues).

How to get there: bus 6 from Kanazawa station, get off at Akatsuki machi. Or walk twenty minutes from Kenrokuen garde. Link: Site in Japanese

I really like this minshuku with onsen in the middle of Hida Takayama. Half-board (when available) offers memorable home cooking and the bathtub, with a glass door facing the outside, is small but extremely pleasant. Separate times for men and women.

How to get there: Walking distance from Takayama station. Book Kuwataniya on Agoda or Booking

Another nice, inexpensive, ryokan with onsen is Takayama which I really like (and has also got a rotenburo) is Iwatakan

This big modern ryokan on the edge of Shirakawa-go is probably the less fascinating building in town. But the onsen (open to the public) is really nice. In winter, the panorama of the snow-capped mountains from the outdoor pool is priceless. .

How to get there: bus from Takayama or Kanazawa to Shirakawago-Ogimachi Book Shirakawago no yu on Japanese guesthouses.

Unzen Onsen is a popular spa resort on the top of a mountain, near Nagasaki, in the Shimabara peninsula. I chose it because it was the oldest in town, but also since it was included among the ‘tattoo friendly’ by The Onsen Magazine.

As a matter of fact, when I asked the old lady at the entrance for confirmation, she seemed a little disconcerted by my confession that I was, indeed, tattooed, but we changed topic quickly and she let us in. I would have hardly offended anyone with my tattoos as we were the only customers in a late winter day. It is a small mountain onsen, very traditional and basic, with a very hot water, perhaps more than the advertised 43 degrees and slightly acidic that comes directly from the nearby Unzen Hell. The cost is negligible (200 yen, but there is no free soap or shampoo). A beautiful, no frills bath.

How to get there: the address is 303-1 Obamacho Unzen, Nagasaki. The map

This old Ryokan, that dates back to 1928, is a true jewel in Oita, Kyushu. I had planned to go to the famous Kurokawa onsen at the beginning, but a combination of circumstances led me to change my mind. First, for a March weekend the prices were crazy, 45.000 or 50.000 yen were the minimum for a double room. Yufuin looked even worse.

And also Kurokawa onsen didn’t look tattoo friendly at all, and one of the reasons to go there is to try all the public baths. So we decided for this place (this too featured on The onsen magazine) in Kokonoe. It’s a typical mountain ryokan, famous for its cold spring, but has also wo public baths and three private baths. It was amazing. And the food and the staff were outstanding. I loved this place, and these are the places that can make your trip.

One of the private baths in Kannojigoku (photo by Patrick Colgan)

Kan no jigoku is not tattoo friendly, but the three excellent private onsen will be more than enough for tattooed guests.

How to get there: Kokonoe is north of Aso and south of Yufuin, in Oita. The address is 257 Tano, Kokonoe-machi, Kusu-gun, Kokonoe, Japan. Book Kan no Jigoku on Booking or Agoda

This site uses Akismet to reduce spam. Learn how your comment data is processed.